Although my whole wheat crusts were never beautiful to look at, they were tasty and I always loved the heartier texture of a whole wheat crust.  My husband requests an apple pie in lieu of cake for his birthday every year, and I was always happy to oblige.

Now that he has been told by his doctor to do away with gluten for awhile to address some health problems (although he is not celiac), what I am supposed to make for the poor man on his birthday?  I know – it’s all about me isn’t it?  😉

I have tried a number of gluten free crusts, but as with most gluten free baking, (IMHO), the inclusion of white flours and starches such as potato starch and tapioca flour run afoul of my desire to use whole grains whenever possible, and since they don’t taste very good anyway, I’ve not stuck been very persistent in my search for a solution.

Enter the walnut crust.  Yes, the humble, nutritious, crumbly, bumbly walnut.  I had a friend who used to call me walnut – so I’m allowed to humbly call them crumbly and bumbly.

Thank you to Mark’s Daily Apple for what he calls ‘The Ultimate Walnut Crust”   He uses butter – I used coconut oil, otherwise I followed his short – and very easy recipe and filled it with gluten free apple goodness.  While the crust was not firm, in fact it was a bit like an inverted cobbler, it was FANTASTIC.  I had to remove the pie plate from the table so that the three of us might be able to have some the next night as well.  It was quite filling, but we were verging on engaging in a little Roman eating, so I snatched it away.  Little Sis – this bad boy will be on the menu when we vacation together this summer!

It is possible that butter would give you a firmer crust, but I doubt it as it was only 2 Tbsp of oil to 2.5 cups of walnuts – but if you try it let me know.  I’m not sure I could bear to make it any other way than what I did the first time, but I’d be curious to know!

I think I mentioned this was fast and easy – much easier than rolling out pie crust, which is good because with the sunshine on the garden beds and 2 more weeks in my semester of school, I’m going for easy!

Blend walnuts, baking soda and salt in a food processor until finely ground. Add coconut oil and pulse until oil is mixed in. 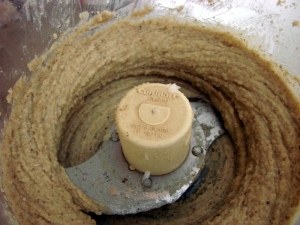 Scrape the batter into a 9-inch tart pan (I used a standard glass pie plate). You can use a rubber spatula to smooth the batter over the bottom and up the sides, you may need to use your fingers – but the spatula did the job for me.  Take your time smoothing and patting the batter out evenly (I did not take my time, so there!).  It’s better to spread the batter thinner across the bottom of the pan and thicker around the edges of the crust (I was not very careful about this). 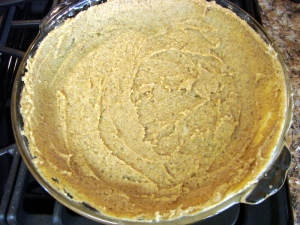 Place the pie on a cookie sheet (helps to keep the bottom from burning) and bake for 15 minutes at 350 degrees Fahrenheit. (I did not use a cookie sheet with my glass pie plate and had no problem – I know, I can occasionally be contrary and difficult to work with)

Remove the crust from the oven and pour your filling of choice inside. Bake again until filling is done.

Apple Crumbly Bumbly Filling:  (you knew I’d have to come back to that, didn’t you?)
4.5 large Fuji apples – sliced, chunked, however you like them.  The bigger they are the longer they’ll take to cook.  Just cut enough to make a heap in your pie plate.
1/2 cup granulated sugar
1/2 cup + 1 Tbsp. (or one heaping 1/2 cup) oat flour.  (Just whiz some oatmeal in the blender to make oat flour)
1 Tbsp. cinnamon

Chop your apples, mix with other ingredients in a bowl and then gently dump into prepared pie crust after baking pie crust.  The crust will be very soft and puffing up in spots with heat.  I just dumped gently so as not to shove crust away from the plate.

I baked mine for about 20 minutes at 350, then I covered it with a bit of aluminum foil and baked it about another 25 minutes.  I had no problem with the crust burning and think I could have turned the temp up a bit and been done earlier, but go with what you’re putting inside and how soft you want your fruit in terms of temp and time.

The speckles on the top are just bits of oat flour.  I thought about putting a crumble on top, but I won’t bother next time either as this was so very delicious.  In fact I am wondering right now if anyone will notice if I eat some of it with my lunch.  No, they will notice.  My son probably measured how much was left when we finished dinner last night.  Geometry does come in useful after all – I’ll have to point that out to him 😉

Like I said,it’s not a terribly pie- like crust, but nobody over here cared.  They all just asked for seconds.

I just love to serve a dessert that is delicious and does not promote guilt in everyone.  Enjoy (and if you have a wonderful GF pie crust recipe that uses whole grains – I’d love to know about it!)

Ready to Change? Our book will show you how!

Take a Step! Grab our Button!