Well Hello There!   It has been an exceedingly long time since we’ve posted, and mostly that was because we were visiting with friends and family every single minute.  It was a truly wonderful holiday and, speaking for myself, I am oddly both rejuvenated and completely exhausted.

During an extended visit with the best friends a gal could have, someone asked how I moved away from cooking from recipes – how I started making recipes up and how I knew what substitutions would work.  I know, those of you who’ve been playing along for a while are likely laughing as I’ve presented my move away from recipes as a basic inability to follow directions and recipes of any kind…. this being different from choosing to cook without that level of guidance.  The truth is that I do both – I regularly screw up whilst following directions and, hopefully more often, I make conscious decisions to abandon the dictates of the recipe for one reason or another, usually either to make the recipe healthier or because I lack an ingredient and I do NOT shop for a missing ingredient or two (lack of control in grocery stores demands limited exposure).

Since my friend asked, I’ve been thinking a lot about how this evolution occurred, wondering how I got to the point of really only being inspired by a recipe rather than actually following it, and I think there are some basic steps that could prove useful to folks in trying to branch out and/or health it up in their own kitchens.  There are myriad lovely cookbooks and blogs full of healthful recipes in the world.  There are also ways to change most recipes so that they are 1) healthier, 2) more affordable, and 3) easier to prepare. Here I’ll offer three approaches that have made me less recipe bound and have therefore made me able to adapt all kinds of recipes to my own tastes, dietary needs, and available time: the ingredient swap, the recipe mash up, and flavor profiling.

I find that the best way to start tinkering with a recipe, particularly if it is a favorite recipe of some kind, is to simply swap out one of the original ingredients for a healthier or more readily available, ingredient. There are a few good questions to bear in mind when you want to make substitution. What role does the ingredient play in the recipe? What flavor does it impart? Is the texture of this ingredient important to my enjoyment? Does the ingredient play a particular role in the chemistry of the food (i.e. baking)? Sorting through these kinds of questions will help you decide if you can swap something out (or if it’s critical to the dish as you like it) and will help you make better choices about what to put in that ingredient’s place.

I regularly make substitutions in making cookies and lunchbox treats.  And the holidays having just passed, there’s been a bit o’ baking around here.  Mr. Little Sis LOVES chocolate chip cookies – the straight standard deal, semi-sweet chips in a butter and white flour dough.  Nuts are acceptable to him and have, over time, become part of the standard deal. While I have not tinkered much with them in the past, leaving one sacred cow for his consumption, I decided this year that it was time.

I didn’t go crazy and I didn’t turn them into any of the healthier, low sugar varieties that I have put together for kids’ lunchboxes.  I started with a couple of small swaps and adjustments and decided we’d see how it went. I began with the recipe on the back of the bag of chips.  I ditched the white flour and chose to replace it with whole wheat pastry flour to avoid the weightiness of straight whole wheat.  I dropped the white and brown sugar in favor of a smaller measure of coconut sugar (I regularly cut the sugar by at least 1/3 when baking treats from a standard cookbook), and I switched out the butter for coconut oil (for my own dairy allergic self, because I like chocolate chip cookies too). I made these swaps in one fell swoop because I’ve used these substitutions before and was confident they would work, but I’m pretty sure when I began healthifying my scene, I just started with the flour switch. Practice creates confidence and any step is a good one. How did they come out? They were fan-flipping-tastic if I do say so myself.

In another holiday gathering example we decided to make pesto to serve with Mr. Little Sis’ homemade pasta for some of our guests.  Traditional pesto is dairy full and therefore not a great option for me.  So I gave some thought to that parmesan – the role that it played.  The parm gives saltiness and a bit of cheese flavor.  And so, using the pesto recipe in The Complete Book of Pasta and Noodles,

I decided to ditch the parm, increase the nuts I used in the recipe, up the salt, and add a little nutritional yeast to impart a little cheese hint.  I also threw in some spinach, cuz I’m sneaky like that.  The result? Superb, even by the dairy lovers’ standards.

Another method I’ve used to either health up or change an unavailable ingredient for a recipe is to combine different recipes for the same food.  The internet is a wonderful tool and one of my favorite uses is to type in the name of a dish that I’d like to make and scan through different recipes for that dish, to see how different people make it, to compare the herbs and spices that they use, to see if there’s already a healthier version someone’s done the work for.

This scan of the field often leads me to create my own version that mashes everyone’s hard work together (sounds unkind, but works rather well).  This was my method for making my beloved Molasses Spice Cookies this Christmas.  I found this recipe in The America’s Test Kitchen Family Cookbook

a few years ago and it quickly became one of my absolute favorite holiday cookies.  The overall effect is a little like gingerbread, but more complex and in bite sized form – who can resist that during the cold winter evenings?  The problem? You guessed it, white flour and the butter that would have me on an inhaler after consuming my usual plate full of these babies.

Rather than doing a random scan of the internet, I turned to a trusted source for such items, my friend Annie at An Unrefined Vegan.  Annie is a genius, and her baked goods frequently make me swoon.  I was delighted to discover that she, too, is a molasses cookie fan.  She sorted out my butter problem (lowering the fat as well by using some prune puree in place of some of the fat), but the recipe varied ever so slightly.  My original go-to called for just a smidgen of black pepper and had slightly higher quantity of some of the spices than Annie’s amazing cookies.  What’s a girl to do? Take Annie’s dough and add the few little bits to make her fantastic molasses crinkles more like the molasses spice cookies my nostalgia was begging for.  Ta Dah.  Lower fat, unrefined, better ingredients and the same zip I was used to.  A sucessful mash up indeed. The results are pictured above on that plate of fabulous (and relatively healthy) holiday offerings. 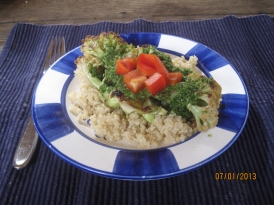 Another method I use to get myself out of the recipe book and free myself for a little creativity is to get the basic flavor of a recipe and simply apply it to the ingredients that I have on hand.  This is most easily accomplished when the recipe includes a sauce. If I really love the flavor of a dish, but don’t have what I need to make it, I examine the recipe to extract either the sauce or the liquid/spice/herb combo that makes that dish taste so good and put it on something else that I do happen to have.  This method allows for enormous flexibility and also allows for combining foods that you don’t usually see together in recipes.  My Fabu Asian Peanut Sauce and my Kinder Gentler Chimichurri are some of my go to sauces for meal improvisation.  Big Sis shows you just how to make a flavor profile travel across ingredients here.  One dominant flavor, your available ingredients as the vehicle.

So that’s at least a little peek into how I’ve become a healthier and less recipe bound cook.  The most effective way to become a great home cook is to do it, and do it a lot.  With each meal you’ll become faster at the meal preparation and if you regularly try new recipes and innovations, you’ll also learn a lot about what tastes great and fits your own dietary goals. Happy Healthy Cooking for 2014!

Ready to Change? Our book will show you how! 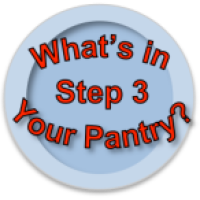 Take a Step! Grab our Button!